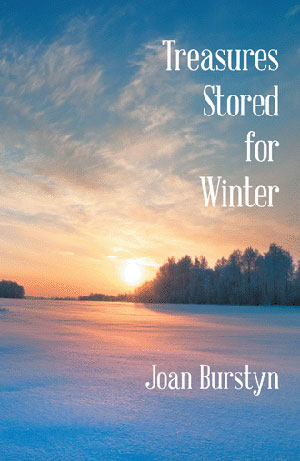 Treasures Stored for Winter
By Joan Burstyn
Published by iUniverse, 2014

Joan Burstyn’s fourth book of poems, Treasures Stored for Winter, draws the reader into the author’s life from the mid-twentieth century to the present day. At times, personal and political events combine—as happens on the evening of June 30, 1982, when the last state legislature rejected the Equal Rights Amendment. At that moment, Burstyn stood with other women around a pond in South Orange, New Jersey, as they raised their voices in protest as remembered in “Waiting to Rise Again.” In this collection, Burstyn makes clear that life demands both awe and optimism from us.

“My first dip into Treasures Stored for Winter brings up a small package, “After Snow”; it bursts open with imagery so vibrant and glowing that I can’t help myself. I dip again, bring out “While the House Sleeps”; with its commanding imagery metaphorically I become “… a matador/swirling my red cloak/before the bull, prodding it with my words.”
—Joanna Chrzanowski, SUNY Distinguished Teaching Professor; chair, English Department, Jefferson College

(After a suicide bomber blew up a bus in Jerusalem, 2004)

Our conversation meanders, like a lazy stream
edged by tall grasses, hiding
burrows of water rats and moles,
and bull frogs, camouflaged as stones,
croaking to each other across the water,
intermittent as two fog horns.We have hidden burrows in our lives,
mistakes we buried, quick as a squirrel,
and treasures, stored for winter,
concealed where tall grasses grow.
Our conversations meander past each one,
our words, like water, smooth the edges,
penetrate the crevices, and leave us
free to float on down the stream.

Once more, the fir trees stand in sun
limbs sprinkled with white icing,
the ground stark as a white sheet on a bed.
A bed inviting, cool and firm.I sit watching through my window,
a voyeur of daydreams,
that turn the frigid air warm
with actions, vibrant and afire,
and promises, small embers glowing
red and orange in my mind.

A year now, and barely a murmur,
barely a squeak of verse.
Just words marching in line
to another’s drummer, churned out
in time for deadlines. Words manicured
like nails, characters trimmed
to match each on-line specification.
No time for lavender, for black-eyed susans,
for clouds proclaiming the setting sun
in grey, slate blue, and orange,
smiling and warm, as though back-lit on stage.